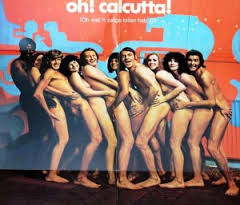 There’s a very candid, funny memoir from 1973 called “First Your Money, Then Your Clothes—My Life and Oh! Calcutta!” written by one Raina Barrett (stage name), a divorced high school teacher from Westchester who had the nerve to join the cast of the then-scandalous Broadway musical “Oh! Calcutta!”

Born Pauline Kelly (from Detroit), then married to Mr. Clark, a high school football coach, she chafed against the limitations of the suburban ethos as it was (and still is) widely understood. And she chafed in just about the most visible way possible, by joining, at age 33, those other naked thespians in what has become a symbol of the hippy-dippy 1970s. (The show opened in 1969). She did the 1972 movie version also.

Bail money was at the ready when the show opened, in case of vice raids. Apparently, the noise of helicopters and trucks was deafening outside the theater. Audiences were absolutely convinced that real sex would be and was being shown on stage, though Raina laughs that off: all simulated. One scene was so provocative that it was cut, however, after its participants allowed that they were “really” doing it. The entire cast was screwed, no pun intended, by the producers.

Merv Griffin wanted her for his talk show, to undress but only be shown from the neck up, so he could capture the audience response. She declined. Then Johnny Carson called. She said “I won’t undress, but I have a great story about Merv Griffin.”

She gave it all up for a career in acting, after community theater became unsatisfying. Then, she was told that she wasn’t a “real” actress because she removed her clothing. Catch-22.

She said of promiscuity “The way I see it, sexual freedom is good for one thing only. It guarantees you a good choice. But you still have to choose. I’ve tried promiscuity and it doesn’t work.”

Many of us were promiscuous without the platform of a Broadway musical. I agree with Raina.