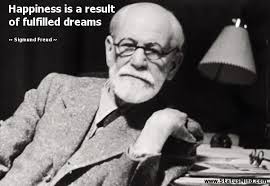 Sigismund Schlomo Freud was born in (today’s) Czech Republic in 1856. He died in London in 1939, an escapee from Nazi occupation of Austria, from cancer of the jaw due to heavy smoking. Sometimes a cigar isn’t just a cigar.

“Father of psychotherapy” indeed he was. The theory that persistent illnesses might have a mental/emotional origin was radical. “Repressed contents” might fester and lead to physical symptoms, as Freud saw in case after case of (usually women at first) hysteria (another gender-charged word), panic attacks, agoraphobia, depression, were cured by talking and bringing to light certain major emotional traumas that had been buried or blocked.

The core idea really does hold, even today, despite images of the neurotic upper-east-sider, such as Woody Allen, going three times a week for decades and making no progress.

I personally think a balance needs to be struck between releasing of “blocked” material from the mind, and what may become a “rehearsal of trauma” that can grind these moments even deeper into the psyche.

Freud is also famous for identifying certain classic developmental stages that start in infancy (perhaps even in the womb), such as the “Oedipal” complex, anal/oral fixations, innate drives that are sexual and destructive in nature. Id, ego, super-ego: all these commonplace words are due to his work.

Did you know that Freud advocated for the use of cocaine as both stimulant and pain reliever?

And of course, his seminal work on dream interpretation that, for me, really finds its best exponent in the different work of Carl Jung.

Over the many years, some have seen fit to discredit some or all of Freud as too unscientific (by modern standards), too fixated on sex, etc. But there is no denying the enormous influence of this one man.

“The mind is like an iceberg, it floats with one-seventh of its bulk above water.”