I think of Bach’s little organ chorale setting from the Orgelbüchlein (Little Organ Book) “Das alte Jahr vegangen ist” (The Old Year Is Passed Away, BWV 614). With its anguished chromatics, I don’t get the sense of optimism that a new year is coming, but the heavy regret that yet one more precious “old” year has been spent and will never come again, a typically (18th c.) Lutheran preoccupation in an age of generally short lifespans and lots of illness and child mortality.

I also think of “Father Time” (representing the old year) and his sickle, somewhat like the Grim Reaper, sweeping away everything in his path. Then there’s the new-year baby in diapers crawling onto the scene, unaware of what may be in store.

Speaking of Father Time also reminds me of one of the former “mighty oak trees” of Broadway: George Abbott (1887-1995). Yes, he died at 107! And he was active until a few weeks prior to his death.

He was one of the most ubiquitous producers, directors, and book writers of the Broadway stage. There was a time when it was impossible to lack an Abbott production on Broadway. From humble New York state upbringing, and a stint at a military academy out west, he then went to Harvard, where he was bitten by the theatrical bug.

After a short, undistinguished run as an actor, he quickly became known as a “show doctor,” the person who tinkers with a show that is having a rocky out-of-NYC tryout somewhere before being brought to Broadway. Today, the out-of-town tryout is a dying breed, though I think it should really be reinstated, before they spend millions to mount something on Broadway only to have it flop. 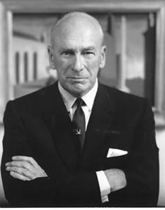 A short list of Abbott productions (either as producer, director, or book writer, sometimes all three) would include these iconic shows, and this is only a fraction:

So, check out one of Abbott’s “children,” and have a healthy new year!