From gamelan and Mozart to human sculpture and digital dance, West Goes East – CalArts at the Kitchen presented the astonishing diversity of California Institute of the Arts (Cal Arts) alumni based in the New York metro area.  Valencia, California based CalArts is considered one of the nations’ foremost laboratories for innovative artistic practice and the artists and performers in West Goes East exemplify the Institute’s tradition of experimentation. 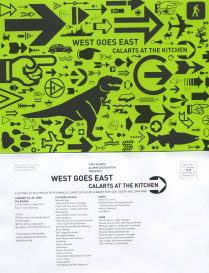 Randall Packer, Secretary of the U.S. Department of Art and Technology co-hosted the final program on Saturday the 29th. This special night featured The Code Ensemble, led by composer/bassist Steve Horowitz, who wrote the score to the independent film sensation “Super Size Me.” Horowitz and filmmaker Jane Brill presented the world premiere of “The Re-taking of Pelham One Two Three.” This electric concerto for 14 instrumentalists, sampler and film/video projection is loosely based on director Dick Sargent’s classic 1970′s action film “The Taking of Pelham One Two Three” and its score composed by David Shire. The current incarnation creates parallels between down and dirty ’70s New York and post-911 Manhattan. Shire participated in a pre-concert discussion.