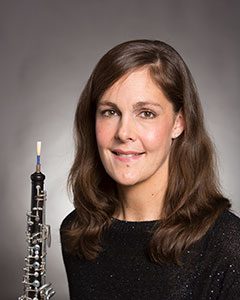 Alexandra is much in demand as an oboist in New York City. She is Principal Oboist of the American Symphony Orchestra and a member of New York City Opera. As well as frequently playing with the Metropolitan Opera, the New Jersey Symphony Orchestra and New York City Ballet, she is also active on the Broadway scene. She was the oboist for “Mary Poppins”, “Fiddler on the Roof” and most recently, “Miss Saigon”. An alumna of the Curtis Institute of Music and the Juilliard School, Alexandra is now on the oboe faculty at Bard College Conservatory of Music. She lives in Brooklyn with her husband, Maxim Moston, and their daughter, Vera.