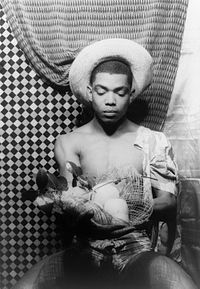 James Baldwin wrote in “The Black Boy Looks at the White Boy”: “To be an American Negro male is also to be a kind of walking phallic symbol, which means that one pays in one’s own personality, for the sexual insecurity of others.”

This observation leapt out at me while reading a biography of Alvin Ailey (1931-1989), the pioneering African-American choreographer, taken too soon by AIDS. When he died, protease inhibitors and the “miracle” recoveries were still six to seven years off. Aware of the stigma attaching to AIDS, he asked that his mother be told that he died of a rare blood disorder.

Despite “our insecurities,” Ailey paved the way for serious consideration of blacks in concert dance. His most celebrated ballet “Revelations,” which premiered in 1960 and was revived and reconfigured many times, is said to be the most often seen modern dance of all time.

The Ailey company served as “Cultural Ambassador to the World” because of its extensive international touring, in a time when Cold War fears had crippled other channels of diplomacy. Ailey was awarded a Kennedy Center Honor in 1988, the year before he died.

Today, the Alvin Ailey American Dance Theater is still going strong, with a new “visible” school (glass-walled rehearsal spaces, etc) on Ninth Avenue in the gentrifying Hells Kitchen section of Manhattan. His choreography is preserved and tended to by numerous dancers with direct experience of Ailey himself, in a way that the Martha Graham company (another one with a specific dance vocabulary) hasn’t been able to equal. There is also a huge amount of video that helps to preserve this most fragile of art forms.