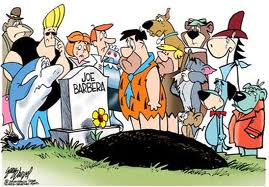 I guess it was a child containment strategy. Funny what you remember. Unfortunately, in my case, I remember way too much when it might be better to let some of it go.

The second house I lived in was built by my father for my mother, brand new, in 1960. Perry, Ohio, carved out of a corner of a 16 acre field that wasn’t used for much of anything, across US Route 20 from the main 500 acre farm.

It was a one story ranch, but had a full basement. Down there was the “playroom,” a euphemism for a concrete floor surrounded by a high plywood “fence,” painted a sickly light green, with a gate, the latch of which was out of the reach of inquisitive kid fingers.

Once you were in there, you were in there until someone came and got you. The hot water heater and furnace hummed nearby. There was, however, a television, probably the first one ever sold commercially. Black and white of course. Pre-cable.

I had my books and my stick horse from Romper Room and my imagination. And that TV.

It brought me the cartoons and Captain Kangaroo. That’s when I first saw the name or names “Hanna-Barbera.” I thought it was a person: Hanna Barbera. Hard-hearted Hanna, the vamp of . . .

Tom and Jerry chased each other inanely for 17 years, beginning in 1940. What I was seeing were the reruns.

Then The Flintstones were on in prime time. I was allowed to go to the “showy ostentatious” house of our nearest neighbors, the Douteils, who had a color set, to watch the Flintstones and the Wonderful World of Disney. Mrs Douteil made popcorn, which was forbidden at home. When they moved to Florida, it was awful.