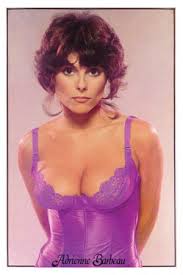 “What I didn’t know is that when I said my lines I was usually walking down a flight of stairs and no one was even listening to me. They were just watching my breasts precede me.”

Yeah, those. I’m not even sure why a gay boy was so fascinated with them. They didn’t produce a sexual response, more like fascination. The only other pair I had ever seen was my mother’s, and maybe a girl in sixth grade who took two guys and me to a house near the schoolyard. Flash. Yawn.

Adrienne Barbeau was born in Sacramento in 1946. She worked as a gogo dancer in certain mob-owned clubs in NYC in the late 60s. She was in the chorus of “Fiddler on the Roof,” then graduated to the role of Hodel, Tevye’s daughter. Bette Midler was her “sister.” Then her big break as the first Rizzo in “Grease” on Broadway. Tony nomination.

Poulenc, via Apollinaire, has the breasts of his Thérèse float out of her blouse and up to the klieg lights as she desexes herself and becomes Tirésias. They’re usually staged with one red and one blue helium-filled balloon.

I saw “Escape from New York” in 1981, having lived there only two years. Another Barbeau classic. Escape was not an option for me. I remember going with some guy I picked up on the steps of the Metropolitan Museum. We weren’t compatible “that way,” but friendly. Each of us was more fascinated with Kurt Russell, as I imagine Goldie Hawn is.

“Swamp Thing.” “The Fog.” “Creepshow.” Getting the idea? Barbeau was getting typed as the cheesy but sexy horror girl. Her then husband was director of all those, and “Escape,” John Carpenter.

“Who cares if I won the race, as long as I bounced when I ran?”

“There are two enormous talents on that woman,” said one waggish critic. He was not alone.

She did do the high-grossing Burt Reynolds comedy “Cannonball Run,” aptly or ironically titled.

If you read her book “There Are Worse Things I Could Do,” you’ll see how engaging and well-adjusted she is, despite all the objectification, including me. She gave birth to twins at age 51, by her second husband Bill Van Zandt, joking that she “was the only one on the maternity floor with an AARP card.”

She continues to work, guesting on numerous tv series, releasing a folk music album, hosting talk shows, etc. And she has teen boys. When will they see a pair bigger than mom’s, and natural? In Hollywood, that’s unlikely, as the craze for artificial enhancement of every body part shows no sign of abating.