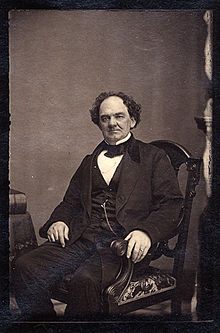 By the way, he didn’t say it: “There’s a sucker born every minute.” But it sounds good.

Thinking about television, entertainment in general, I got to wondering if it is really any different than in the day of P T Barnum (Phineas Taylor, 1810-1891). Good Connecticut boy, born on the fifth of July. Son of an innkeeper, avers to hard work, ingenious, scheming. He wrote his own memoirs well before his death. He even served two terms in the Connecticut legislature, and was mayor of Bridgeport.

Maybe the people were more naïve, but with the way we have passively gobbled the phenomenon of so-called “reality” television, I think we shouldn’t give ourselves too much credit for sophistication.

Barnum was the first truly successful “humbug,” con artist, an itinerant showman who was keenly aware of opportunity.

He moved to New York and acquired a building on Ann Street which became “Barnum’s AmericanMuseum.” You know the Ives song “Ann Street”: Quaint name, Ann Street, width of same, ten feet, but business! Both feet. Rather short, Ann Street.

One of his “exhibits” was a woman named Joyce Heth. She was alleged to have been George Washington’s nurse. A blind, mostly paralyzed slave. Never mind that her billed age was 161. All the right buttons were pushed: patriotism, extremity (in this case, longevity), the freak factor. She died in 1838 at age 80.

Yet, amid all these garish tricks, he managed to find and import a true artist, the “Swedish Nightingale,” Soprano Jenny Lind (Johanna Maria Lind, 1820-1887). She toured all over America in 1850, singing with her trademark coloratura (agility) and charisma, earning herself and Barnum the biggest fortune of any of his schemes. She was paid $1000 a night for 150 nights. But she was an “exhibition” too, a circus act if you will.

Eventually rivals and other hucksters would merge their efforts into what is still called the Ringling Brothers, Barnum and Bailey Circus.

It’s not like he was completely amoral however. He gave generously to many social causes, and had progressive views for his time, on the subject of contraception, for example.

Think for yourself people, and try to evaluate what you’re seeing, being given, hearing, reading. Don’t just swallow it.