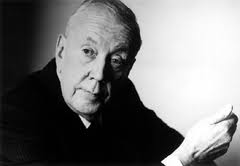 I’m guessing you’ve never heard a note of one of Malcolm Arnold’s (1921-2006) nine symphonies, as I hadn’t before researching this article. What a shame. Second only to Britten in reputation in England, he began life as a professional trumpeter, but turned to composition.

A concert by Louis Armstrong inBournemouthwhen Malcolm was 12 set him on the path of playing the trumpet. He became principal trumpet of the London Philharmonic Orchestra at 22.

Arnold wrote in a staggering range of genres, including chamber music, concerti, ballets, “light” music, and film scores, notably “The Bridge on the River Kwai,” one of my father’s favorite movies. He won the Academy Award for best original score for “Kwai.”

Unfortunately, only the “light” folk and dance inflected music gets any currency, and the symphonies, which contain many advanced and powerful ideas (as well as sweeping melodies) are undervalued. Berlioz, Mahler, Bartok and jazz were all influences.

“Rogue genius” is the subtitle of his biography. He was a conscientious objector in WWII, but after his brother was killed in action, thought better of that and tried to enlist, then shot himself in the foot to escape service.

He also had quite a reputation as a drunk and a womanizer, probably owing to as-yet undiagnosed bipolar illness. “The cruel gift of creativity” as Romain Coolus said.

There’s a generous selection of free sound samples for listening on the Malcolm Arnold Society’s website (malcolmarnold.co.uk), so get going!