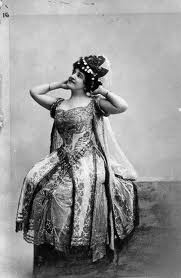 People are always saying that there was a mythical “golden age” of singing, that things were better a long time ago. I mistrust statements like that, but certainly understand why they’re made.

On this 223rd anniversary of the storming of the Bastille, I’m thinking of a soprano who sang in French many years ago. Belgian-born Clara Lardinois (1864-1945), whose stage name was Blanche Arral. She was the youngest of seventeen children.

She studied with the imposing Mathilde Marchesi, she of the vocal exercises that are still used in many studios today. One thing for sure, there was an emphasis on clarity, lightness, flexibility (agility), and diction.

Massenet was so taken with her charm that he created a small role in his new opera Manon (prem. 1884) for her. However, she sang everything from Carmen to Lakmé. Presumably, she sang Carmen in the soprano version, although you never know.

In this mythical “golden age,” there was far less pigeon-holing of the voice into tiny categories. A YouTube recording of Blanche singing the famed “Jewel Song” from Gounod’s Faust reveals a light, flexible, and pleasant voice, through the tinny 1909 audio technology. She would have been 44 at the time, and had already toured the known world gruelingly for years. Nellie Melba and she were bitter rivals (much the same repertoire).

Perhaps the most interesting thing about her, however, is the list of her romantic/social conquests: Sarah Bernhardt, Mata Hari, Franz Liszt, Victor Hugo, Houdini, Saint-Saens, Jack London, Rasputin, and Thomas Edison—if her chatty memoir is at all accurate. She was captive in a Turkish harem, and married four times, lastly to a nondescriptNew Jerseybusinessman.