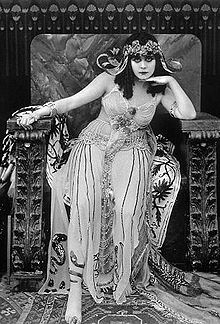 Most of us never pass a day in remembrance of Theodosia Goodman of Cincinnati. I’m here to partially correct that.

If you’re a die-hard silent movie buff, you may be on to me. Theda Bara “The Vamp,” star of stage and the early American silents. Born July 29, 1885, in, yes, Cincinnati, Ohio.

My stepmother, Virginia, born in Ohio in 1918, had vivid recollections of going to see those flickering flicks: Cleopatra, The Lure of Ambition, Unchastened Woman, The Stain, A Fool There Was, and on and on. Aren’t the titles great? Virginia grew up poor, and I’m certain the siren song of these and other movies provided at least the possibility that there could exist something beyond Unionville, Ohio.

Bara made 40 films from 1914 to 1926; unfortunately the nitrate stock caught fire in 1937 and we don’t have much surviving footage. Only six complete films exist.

Naturally, like so many of them, Bara never made the transition to talkies in 1928. She was one of the first “sex symbols” in a somewhat prudish climate. Her costumes, in particular, were revealing.

For those of you New Yorkers or New Jerseyans who are reading, the bulk of her films were shot in Fort Lee, NJ, then the epicenter of the new movie industry. There was no George Washington Bridge, no traffic jam scandal, and no trans-Hudson tunnels. One took the ferry to get there from Manhattan.

Actresses were promoted with all kinds of fake background stories, the more exotic the better. Theda’s included her being Egyptian, French and Scottish. What a stew. Even her name was said to be an anagram for “Arab Death.”

I’ll admit, it takes a rather inordinate amount of patience to sit through these artifacts today, when for instance TCM has one of its brief silent features. For me, it worked best in venues such as New York’s old Thalia theater on the Upper West Side, where we’d sneak down from the nearby Manhattan School of Music. There, you sat in a black box, total immersion, the screen was larger, and somehow it pulled you in. Also, there was live piano accompaniment, very authentic, usually provided by one of our classmates.

I think it best to try to understand the material from the viewpoint of someone who had never seen anything, rather than patronizingly analytical from our “jaded” present. Peer into that melodramatic face and divine the expressive content. It is an exercise in asynchronous empathy.

They called her the “woman with the hungry eyes,” and with that pre-programming, Im sure you will see it too if you’re patient.

“I know things that Theda Bara’s just startin’ to learn/Make my dresses from asbestos, I’m liable to burn.”