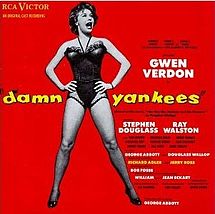 “Steam Heat,” “Hernando’s Hideaway,” “Hey There,” “Heart,” “Whatever Lola Wants.” Quite a line-up of American musical standards. Adler and Ross were unusual in that they both wrote music and lyrics, and their contributions are not separated.

“Damn Yankees” was one of the first musicals I ever saw, in a high-school production in 1966, after I moved to Carson City, Nevada in the middle of third grade. We walked down to the “Blue School,” my elementary school (renamed Mildred Nevada Bray Elementary when I was in sixth grade there) and across the playground was the “big” school, where Yankees was being done. For some reason, my normally dour businesslike father was quite attached to this particular story.

After Ross’ death at age 29, the fountain dried up for Adler, despite further attempts at Broadway shows, including “Kwamina,” whose interracial theme was too advanced for 1961—it ran for barely two weeks.

Adler also organized the famous Madison Square Garden birthday party for JFK, the one in which Marilyn Monroe sang, if you can call it that, “Happy Birthday.”

The surprising point I identified with in reading Adler’s memoir recently, is that his son Christopher (1953-1984) died of AIDS related lymphoma (only two years older than Jerry Ross). He had some wishes to enter the theater world himself, and made a strong beginning, despite the shadow cast by a famous father. He was also gay, participating in the free-wheeling sex/drug/alcohol scene on New York’s Fire Island in the deceptively carefree late 1970s.

Anyway, Christopher’s hematologist was also MY hematologist, Sanford J Kempin. At the time of Adler’s illness, he was with Memorial Sloan Kettering. I met him when I was at the now-defunct St Vincent’s. I remember him telling me (in 2004) that if this had happened to me 20 years earlier, there was no treatment and I would have died. Well, I’m still here.