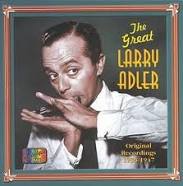 Larry Adler (1914-2001) was generally acknowledged as the greatest harmonica virtuoso of all time. Vaughn-Williams, Malcolm Arnold, Milhaud, and Arthur Benjamin all wrote concertos for him. What? You never heard a harmonica concerto? Where have you been, under a rock? He even collaborated with Elton John, Sting, and Kate Bush.

Born in Baltimore, he went on to take the world by mouth organ storm. In 1935, he began playing a transcription of Ravel’s Bolero, that was in 2/4 time, tricked out as a fox trot. He even played it for the composer, to whom we must grant some leeway, as his brain disease was rapidly progressing at that late stage in Ravel’s life.

Larry Adler performed his harmonica transcription of “Bolero” at Paris’ Alhambra theater. According to Gary Giddins: “Ravel requested him to play it in his home. ‘I played it in from of him, feeling like a schmuck. It was so embarrassing and he never moved a muscle. He just listened to me, and when I finished it, he said, “You’ve cut it.” I said, “Well, yes, I had to because I do a vaudeville act and you can’t do just one number in a 12-minute act.” He said, “You know Toscanini?” I said yes. He said, “Toscanini doesn’t cut it.” He was looking at me and I was looking at him and nothing was being said. So out of sheer desperation, I held up my record of Bolero and said, “Maestro, would you sign this for me?” He said he thought the record was a present for him, which amazed me, and I said, “Sure, Maestro,” and left it with him.

Three days later, I received a call from Jacques Lyon, who ran a record shop on the Champs Elysees. He said, “Get over here at once. Maestro Ravel is in my shop and wants to see you.” I rushed over and there was Ravel with a piece of paper bearing his signature.”

Larry Adler in his memoir “It Ain’t Necessarily So”: “I had a call from Jacques Lyon, who ran a record shop, the Sinfonia, on the Champs-Elysees. He said he’d had a call from Maurice Ravel who had heard that I played his Bolero and wanted to hear me. I couldn’t stand before the maitre playing without accompaniment so I brought my record with me. We drove to Montfort l’Amaury, outside Paris, and had a hard time finding Ravel’s house—no one seemed to have heard of him. When we did find it, Ravel opened the door, took the record and before Jacques could even introduce me, put it on. Until then I’d thought it was a good record, it was a big seller and I was proud of it. Standing there while its composer listened to it I was aware of imperfections, of mistakes that I had never noticed. It sounded awful and, though it was on one side of a 78 rpm record, it seemed interminable. When it finished, Ravel spoke to Jacques.

The master he say, you play it very fast. Why?

Hell, I didn’t know why. I hadn’t ever known that I did play it fast. Ravel spoke again.

The master he says you have made cuts, you do not play the whole thing. Why?

I explained that, in music-hall, my act ran fifteen minutes, which was the length of Bolero. I loved the number, I meant no criticism but, to include it, I had to make cuts.

Jacques said: The master he ask, do you know Arturo Toscanini?

Jacques said: The master, he say that Toscanini plays the whole thing.

Well, he had me there. What could I say? The conversation languished. I held out the record for Ravel to sign. (I had never asked for an autograph before, have never asked for one since. It was pure embarrassment.) Ravel looked surprised.

Jacques said: The master say, he thought the record was for him. Now I was surprised. Ravel had given every sign of loathing the record and me. Then Ravel held up his hands, they were shaking. He said that he had palsy, had written nothing in the past five years. [Adler’s error, Ravel’s last work, Don Quichotte, was composed in 1932.] I apologized and we left. A few days later Jacques phoned me and told me to get to his record shop at once; the master was there. Ravel was bundled in a heavy coat and a scarf though it was a warm day. He said that, by sitting in a dark room and concentrating, he had been able to steady his hand, long enough to write his signature and he had brought it to me. I was touched and honored by Ravel’s gesture but felt guilty as I hadn’t really wanted the autograph.”