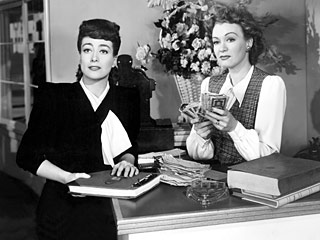 Eve Arden (1908-1990) often played the sidekick or the wisecracking showgirl. In real-life, the daughter of a divorced single mother, that situation would be mirrored eerily in the movie “Mildred Pierce” (1945), where she plays a restaurant manager, the advice-giving voice of practicality to Joan Crawford’s volatile Mildred, who is a divorced mother of Vita, an ultra-spoiled daughter.

Arden was hardly spoiled. She was born into exceedingly ordinary circumstances, making a success by dint of lots of hard work, determination, and luck, an old recipe that has never really been surpassed. Her career spanned over 60 years, including almost all media. Her widest renown came for “Our Miss Brooks,” which began as a radio show, transferred to television, and even had a feature film made of it. She was the high school principal in “Grease” and “Grease 2.”

On Broadway, she was a Ziegfeld girl in 1934, the occasion of her adopting the pseudonym, suggested by two cosmetics bottles in her dressing room: Evening in Paris and Elizabeth Arden.

Her film debut was in 1937’s “Stage Door.” She was nominated for a Supporting Actress Oscar for the role in “Mildred Pierce.” She was also in “Anatomy of a Murder” (1959), which also starred her husband Brooks West.

And who can forget the television show “The Mothers-in-Law” with co-star Kaye Ballard?

If you have forgotten, or perhaps never knew, or are too young to know, it’s my job to remind you (us) of all the hard-working, witty treasures that repose in the infinite museum of modern broadcasting. Take time to explore. It’s all within a finger’s tapping reach . . .

Gomez, Mirabeau, and I will be retiring to an undisclosed spa for refreshment and readjustment during August. The blog will resume in September.