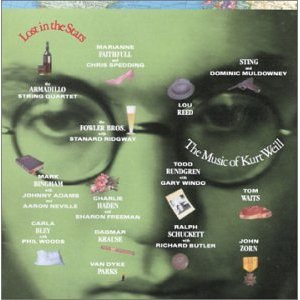 Kurt Weill’s epitaph is a lyric from “Lost in the Stars” his 1949 musical, written with Maxwell Anderson

This is the life of men on earth;

Out of the darkness we come at birth

Into a lamplit world, and then—

Years ago, in the 1940s and 50s, a group of astonishingly creative theater and other artists all seemed to congregate in a small village, New City, of Rockland County, New York, just west of the Hudson River, above New York City. Among them: Weill and his wife Lotte Lenya, playwright Maxwell Anderson and his family, Burgess Meredith and Milton Caniff and his wife, Bunny. They all lived on South Mountain Road, the title of a memoir by Anderson’s daughter Hesper.

For a period in the mid-twentieth century, Anderson was considered America’s “great” playwright. Today, who but the most devoted theater/cinephile remembers “Winterset,” “What Price Glory?,” “The Bad Seed,” “Key Largo,” “Both Your Houses,” “Knickerbocker Holiday,” to name but a few. He truly believed in the social “mission” of theater, a return to the communal/ritual/religious atmosphere of the origins of drama, in ancient Greek culture. He also believed in poetic verse lines, rather than “everyday” street speech.

In “Cry, the Beloved Country,” then “Lost in the Stars,” the greeting of love and farewell is: “Go well, stay well, come well.” “Cry” is a 1948 novel by South African writer Alan Paton. The next year saw “Lost in the Stars,” based on it. When I was a student at Exeter, our required Paton was “Too Late the Phalarope,” rather than “Cry,” so I came late to this important book about racial injustice.

Hesper Anderson, Maxwell’s daughter by his second “wife,” was surrounded by these privileged, emotional creators throughout her growing-up years. She recalls the struggles for attention, issues of competition with her elegant mother, a pre-pubescent crush on a much older neighbor that was discouraged at every turn by the “elders,” and her stubborn refusal to accept any of it. Although surrounded by seemingly every material advantage, she, like so many of us, has demons that must be worked through in order to advance.

Her mother, Maxwell’s second wife, committed suicide in 1953, after having committed adultery, which was discovered by him. This in turn led to his “revenge” affair with a woman who would become his next wife. Sounds like a pilot for a soap opera. Hesper ultimately discovers that her parents were never legally married! Lotte Lenya looked on all the marital mix-ups with typical European wry detachment. Her tactic was to invite Weill’s current infatuation to come spend a summer with them. As she gleefully reported, “In a few days, he was so bored with them all.”

Despite Maxwell Anderson’s Pulitzer Prize (1933, “Both Your Houses,” a political satire), he often had to travel to Hollywood to do the hated screenplay writing for major motion pictures. In those years, with money flowing liberally, Hollywood hired the best literary talents to create the raw material for the movies—but then didn’t hesitate to mutilate, revise, and otherwise practically destroy the original creations of the geniuses they had hired. And, in the process, most of them report that their spirits died slowly, day by day. (Many of them turned to copious amounts of “spirits” to cope.) Hesper met Ingrid Bergman and Katharine Hepburn on these occasions, Hepburn being particularly kind to her. She saw the celebrities not as stars, but in their daily, often mundane lives.

Advance she did, nevertheless, co-writing the screenplay (father’s footsteps) of 1986’s “Children of a Lesser God” with its creator Mark Medoff.

There’s so much more to this story. I heartily recommend Hesper’s memoir “South Mountain Road” for a glimpse into a rare world, yet a common one—the interior struggle to grow up. (Published in 2000, Simon and Schuster)