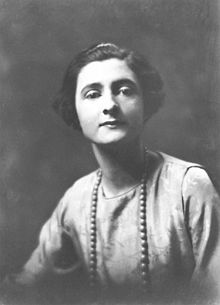 Cecil Beaton called her “that furious lesbian.” Who? Mercedes de Acosta, that’s who.

All right children, I know you’re thinking who the hell was Cecil Beaton, for starters. Beaton (1904-1980), was best known as a fashion and portrait photographer, though his career also encompassed costume and set design, interior decorating, and creating confessional diaries of his privileged life. He won two Academy awards, for set design for “Gigi” and “My Fair Lady.”

Merdeceds de Acosta (1893-1968) was born into the “gilded” New York society of Fifth Avenue, when that street still meant something besides retail. She wrote many volumes of overwrought poetry in the 1920s, before turning to equally overwrought plays, none of which were very successful, despite having famous names attached to them.

Forced into a marriage with a man, she nevertheless continued racking up affairs with the most prominent women of the early twentieth century. A list of her lovers would have to include: Marlene Dietrich, Greta Garbo, Alla Nazimova (1879-1945, “Salome” in a silent movie), Eva Le Gallienne (1899-1991, acted in Molnar’s “Liliom” on Broadway in 1921, the play was the basis of the musical “Carousel”), Isadora Duncan, Tamara Karsavina (1885-1978, Russian ballerina in Diaghilev’s Ballets russes), Pola Negri (1897-1987, silent film siren), Katharine Cornell (1893-1974, stage actress, played Elizabeth Barrett Browning on Broadway in “The Barretts of Wimpole Street” [1931]), Ona Munson (played Belle Watling in “Gone With the Wind”), Adele Astaire (1896-1981, older sister of Fred), and Tallulah Bankhead. They were not all equally appreciative of being outed by Mercedes in her autobiography, which appeared in 1960.

So that’s a lot of estrogen-rich references to explore, but you know how historians are. We don’t want anyone to be forgotten . . .