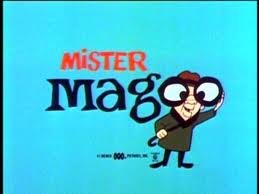 He was nearsighted and so was I. That’s all I needed to know. Mr Magoo, voiced by the inimitable Jim Backus (1913-1989). The cartoon began life as short films in 1949, and was very politically incorrect, even down to the stereotyped Chinese servant “Chollie.” By the time I saw them, the cartoons were being produced for television.

What did I know from “Rebel Without a Cause” at that age? I had to wear glasses from age five, a source of unending ridicule from my little playmates.

And then in 1964 comedy heaven: On “Gilligan’s Island,” he embodied Thurston Howell III, which was based on an old radio character Backus did named Hubert Updyke III. Hard to believe it was only on for three seasons. 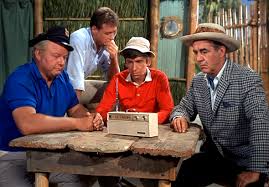 Backus was born in Cleveland, just 35 miles to the west of my hometown, and grew up in the tony golfing suburb of Bratenahl. He attended Shaw High School in East   Cleveland, which is where my father also went. Backus was good enough to be a minor professional golfer. He was kicked out of a military school in Kentucky for riding a horse into the dining hall.

He was happily married to Henny (Henrietta Kaye, 1911-2004), a 1930s Broadway showgirl. She appeared in one episode of “Gilligan” with Jim, and survived his death from complications of Parkinson’s by fifteen lonely years.