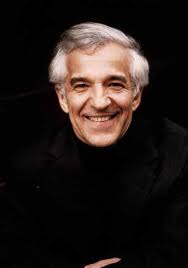 Every time I see the name Vladimir Ashkenazy, I think about my mother, who was Sephardic. Chain of association is a strange beast.

The Asheknazi Jews descended from the medieval Jewish communities living along the Rhine River. In the Bible, Ashkenaz was the son of Gomer (not Pyle). Heine, Freud, Mahler, Einstein, Gershwin, and Leonard Bernstein were all of Ashkenazic descent. Not a bad roll call.

The Sephardic Jews descended from Spain and Portugal before they were expelled in 1492. My Moroccan mother is a prime example, as were Maimonides and Spinoza.

But anyway, Vladimir Ashkenazy, a Cancer like me (b. July 6, 1937, in Gorky) is one of the great classical pianists of our time. Today, he mainly conducts. He has traversed the entire standard repertory many times in concert and recordings, always with the greatest virtuosity and a kind of sober structural intelligence. He has won six Grammys.

If you want to hear a more “unchained” Ashkenazy, try to get a hold of a recording he made of the Chopin Etudes when he was 19 and entering all the competitions. It’s an amazing document, full of passion amid the controlled tumult of immaculately rendered notes. I don’t think it was ever commercially released, but “piano nuts” have copies circulating.

You know he was harassed and followed mercilessly by the KGB, as were so many Soviet-era musicians. I’m sure they were afraid he would defect, which he eventually did (1963), but not before marrying an Icelandic woman who was forced to renounce her Icelandic citizenship to marry him.

In 1972 he became a citizen of Iceland, then in 1978 the family (with five children) moved to Switzerland, where he maintains his home today.

I often wonder what he’s thinking when accompanying a young firebrand soloist, such as Jean-Yves Thibaudet, in concerti that he cut his own teeth on decades earlier.

Ashkenazy wore a trademark white turtleneck under his tux jacket instead of white tie and formal shirt. He also had a way of “running” to the piano from the wings. Many a performer can identify with this way of shutting out the clamor of pre-performance nerves.

His discography is enormous and varied. Try some today!