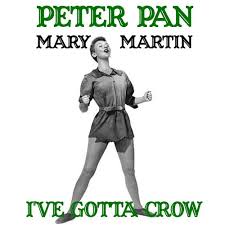 What do Mary Martin, Sandy Duncan and “?” have in common? That’s right, they all starred in “Peter Pan,” a musical based on the 1904 play (Peter Pan, or, The Boy Who Wouldn’t Grow Up) by James Barrie (1860-1937). “?” is the as-yet unnamed star of the next live NBC musical presentation, following on the success of last year’s “The Sound of Music.” Maude Adams (subject of a previous blog post) was one of the first Peters, he seems to have mostly been played by adult women, a gender-switch that only adds to the ambiguity and psychological depth (or distress) of eternal childhood.

The character had made a brief appearance in a 1902 novel. Then the play became a novel again in 1911, Peter and Wendy. Talk about recycling your greatest hit. Well, Handel did it too.

The character was inspired by Barrie’s older brother who died in an ice skating accident the day before he turned 14, and was thus ever a youth in his grieving mother’s mind and heart.

Barrie never specified the actual “look” or age of Peter Pan, and it varied considerably from the first stage appearances in 1904 (red costume) to the latest, including Disney et al (green costume). He did say that Peter had all his “first teeth,” which would make him younger than 13, and that he was a “beautiful boy with a beautiful smile, clad in skeleton leaves and the juices that flow from trees.” In the play, his costume is made of autumn leaves and cobwebs.

Recently, a successful Broadway “prequel” called “Peter and the Starcatchers” was an enjoyable re-do, telling “how they got that way.”

Barrie had a long-suffering actress/wife, one Mary Ansell (1861-1945). But he couldn’t give up his obsession with the Llewelyn Davies family, particularly the mother and her boys, who became the “Lost” Boys. Incipient pedophilia? It seems the late-Victorian age was rife with it, witness Lewis Carroll and Alice Liddell. Ansell was no peach either, having an affair with a colleague of Barrie. Conveniently, he sued for divorce on the grounds of infidelity, although he had been emotionally “elsewhere” for years too.

As we know by now, Disney purified the muddy waters surrounding all this, tidying yet another fairy tale into innocuous childhood pabulum.

Michael Jackson, that arrested development poster-child, named his extravagant California ranch “Neverland,” filling it with all manner of age-inappropriate attractions. He paid dearly for his weird, but I imagine ultimately harmless, obsessions.

I understand advertising people and their ways intellectually, but I will never “connect” things the way they do. One of the major bus lines to points around the northeast is called “Peter Pan Trailways.” The only place I feel I am going when on one of those buses is “Nowhereland,” or maybe “Never-ArriveLand.”

If today’s thoughts are somewhat disconnected, chalk it up to stardust.

“It does seem inevitable that anyone who is completely dedicated to a task which is almost unrealizable must suffer for it.” James Barrie

Stirring words for any creative or recreative artist.