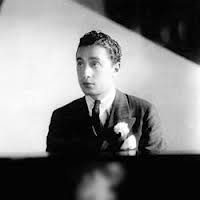 Let’s take a moment to appreciate Harold Arlen (1905-1986), the composer of songs so iconic that they occupy our cultural imagination in a way “beyond” the man who wrote them. In that sense, he could be the “man that got away.” But we should remember that there is a creator behind these works, and that a lot of hard work and inspiration produced the treasures that inhabit our cabarets and our dreams.

Perhaps the man who really got away was his twin brother, who died just one day after birth, leaving little Hyman to be doted on by his parents. His father was a cantor in a Buffalo synagogue.

His most famous accomplishment is the composing in 1938, with lyricist EY “Yip” Harburg, of “Somewhere Over the Rainbow,” part of the complete score requested by MGM for “The Wizard of Oz.” The song won the Oscar for Best Music-Original Song. We can’t imagine Judy Garland and her subsequent stardom without it, or his other contribution to her legend “The Man that Got Away” from “A Star Is Born.”

Supposedly, he was driving along Sunset Boulevard, stopped in front of the legendary Schwab’s Drugstore, when he saw a rainbow, thus the idea for “Over the Rainbow”!

Other legendary Arlen songs include: “Get Happy,” written in 1929, but used in “Summer Stock” (1950, Garland again); “Stormy Weather,” made famous by Ethel Waters, then Lena Horne; “Blues in the Night,” with words by Johnny Mercer; “That Old Black Magic,” memorably destroyed by LuAnn Poovey in “Gomer Pyle USMC”; “One for My Baby”; “Come Rain or Come Shine”; and “Accentuate the Positive.”

By the way, he was happily married to the same woman for 33 years, until her death in 1970. When she died of a brain tumor, he lost interest in life and began withdrawing, even from close friends.

The man made a roll call of some of the greatest tunes, in an era that was not lacking in them. So get thee to Thy Tube, and explore your favorite renditions of Arlen.