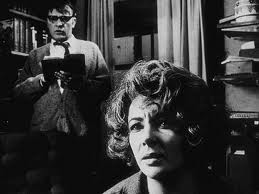 The scene: A seedy cabin-type motel on the highway leading north from Salinas, Kansas. Year: 1967. Late July or early August. Time: 9 PM. Temperature: 102 degrees Fahrenheit. We’re on the annual farm inspection tour, my father, stepmother, and me. Any motel that costs more than $9.99 is unacceptable to my father. So, no swimming pools, ever. “They just jack up the price for that.”

The room door is open, giving right onto the highway. A tired electric fan is on the sill, blowing hot air into the room. A wobbly black and white television is the only sign of life. All at once, manna falls from heaven.

A broadcast of the movie version of Edward Albee’s 1962 play “Who’s Afraid of Virginia Woolf?”

Liz and Dick slashing and burning their way through the bitter invective. How could a nine year old boy so identify? And how could this controversial drama, with its salty language ever have wound up on TV, in Kansas?

Albee didn’t win the Pulitzer for the play, because the prize board was shocked at the language. Even the MPAA had issues with its use of “screw” and “hump the hostess.”

Albee later won three Pulitzers for other plays. “VW” won five Tonys, and the film version five Oscars, though it was nominated for thirteen! Mike Nichols first feature film as a director, amazing.

George and Martha, after a night of boozy small-college networking, come home for even more drinking, and their usual “jousting,” this time with a fresh young married couple they have invited over at 2 AM.

Is their baby imaginary? It’s a common theme in Albee, perhaps reflecting his parents’ giving him up for adoption to a rich, but loveless, Westchester couple. The young couple had a shotgun wedding due to that wife’s hysterical pregnancy. Clearly, reproduction is a problem in this claustrophobic world.

Speculation abounds about the meaning of the title, the sort of intellectual pun that might occur at a college. Albee claims to have seen his future title scrawled in soap on a “message mirror” in a Greenwich Village bar he frequented. But he also enjoyed mystifying, and like many artist did not like to “explain” his work.

The lead characters, George and Martha, are usually said to obliquely refer to our first president and his wife. You know, “I cannot tell a lie” (even though he probably never said that). Albee’s work inspired a 1974 children’s book (!) by James Marshall in which George and Martha are cartoon hippopotamuses that teach each other gentle moral lessons.

Albee’s George and Martha humiliate and destroy everything, everyone, and each other. Yet, they seem to need this interplay, and I even find the end gently optimistic. They have burned through all their illusions and have a chance to start over. Well, on good days I think that.

I memorized every line seemingly instantly, and later in life, never was more than an arm’s length away from my copy of the play. I’d perform all the parts, or just Martha, or just George, for anyone who’d listen. Yes, it was insufferable.

If you’re on Netflix, or even if you’re not, check out this landmark film, one of the most successful transfers from stage to movie.