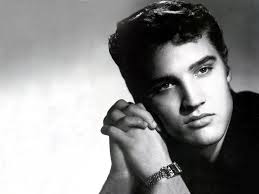 Elvis died, age 42, before his father did, a fate no parent wants to experience: surviving your own child. Before Madonna, MJ, the Beatles, there was Elvis, yet he never performed abroad. Television was his friend. He said: “I never danced vulgar in my life. I’ve just been jiggling.” And he was in 33, count ’em, movies. Nominated for 14 Grammys, won three. And he served in the military for two years. Beyoncé won’t be doing that.

Although I was too young for the initial hysteria, they say that the immense magnetism of a live performance by him survived, even into the “bloated” drug-addled late years. Sadness of the artist-persona who is given too much too soon, and yet has the temperamental imbalance many feel is a prerequisite to true creation. Have we romanticized all this? Or is there a germ of truth therein?

“I don’t know anything about music. In my line, you don’t have to,” he supposedly uttered. Seems possible to me. He was just overtaken by rhythm, as he said on many occasions, and it was a “whole-body” tidal wave. That’s what so shocked the prim 1950s America that had barely absorbed early rock music. There were fewer options, comparisons to be made, and so he became one of the “one-namers.” The King. Cher’s (another one-namer) career has lasted through six decades, largely because she is grounded and doesn’t abuse her health.

Born in Mississippi, moved to Nashville at age 13 and the rest really is history. Graceland has more visitors than any US attraction, with the possible exception of the Disney theme parks.

Think about fame before you say you really want it or place people on pedestals. There’s always a room waiting at the Heartbreak Hotel.

Elvis and I will be fishing with Franz for a month, back in September.