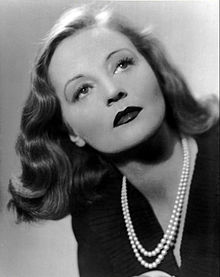 A very quotable “hard” woman, a gay punch line, the inspiration for Cruella DeVil, a remnant of another era. All of these and more, Alabama native Tallulah Bankhead (1902-1968) was not “long” lived, but packed a lot into those sixty-six years.

A stage and screen star, with a distinctive deep voice, she remains an indictment to the cookie-cutter minor celebrities of today.

“Cocaine isn’t habit forming; I know because I’ve been taking it for years.”

My favorite Tallulah role is definitely the reporter in Hitchcock’s “Lifeboat,” that 1944 WWII bit of paranoia, in which several survivors of a torpedoed ship find themselves in the titular conveyance, A Nazi (Walter Slezak) also washes up and is taken on. Is he a human being deserving of care, or an implacable enemy? Turns out, he was the captain of the U-boat that sank the original ship. He variously betrays the others, and is finally beaten and thrown overboard, as the original good nature of the crew flips to desperation.

TB plays Constance “Connie” Porter, a columnist, clad in a mink coat, with her expensive camera one of the first things to go overboard. She sacrifices her precious coat to warm a fragile English nurse. The camera loves her face, and is particularly revealing as she cozies up to the butch John Hodiak. She came down with pneumonia twice during the shooting, which took only three months in 1943, and won the New York Film Critics Circle Award for Best Actress for the role.

“I was raped in our driveway when I was eleven. You know, dear, it was a terrible experience because we had all that gravel.”

We forget that she was Selznick’s first choice for the role of Scarlett O’Hara! Bankhead was always at odds with the “Hollywood” film process, finding it way too boring and slow. She thrived on the live stage from 1918 to 1964, where her hamminess and “camp” exaggeration, combined with truly professional adaptability made almost every role, even (or especially) in inferior material, a hit.

Some decidedly not inferior material she favored included: The Little Foxes, The Skin of Our Teeth, and Private Lives.

She described herself as “ambisextrous,” and her voracious appetite for affairs with men and women quickly became fodder for legend and gossip. She was only married once, for four years, to actor John Emery.

Recently (2010), Valerie Harper played Bankhead on Broadway in “Looped,” the tale of an exasperating voice-over attempt late in Tallulah’s career. The show closed barely a month in, as the audience who remembers her exploits is old and shrinking daily.

Let us activate our Netflix and remember!

“If I had my life to live again, I’d make the same mistakes, only sooner.”