In the “dim ages” of early music study and performance in late-nineteenth century France, one name stands out: André Pirro (1869-1943). His biography of Bach, actually his Sorbonne thesis, (pub. 1907) still holds up as a seriously considered musicological study, despite more than a century of progress and additional research. 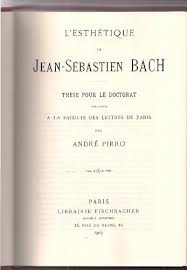 He studied the organ with his father, then Franck and Widor, and went on to hold various organ positions as well as teaching at the Schola Cantorum and the Sorbonne.

His understanding of Bach’s musical motifs and their connection to sacred texts and symbolism was outstanding, predating by several years the studies of Albert Schweitzer, who became better known due to English language translation of his work.

I always tell my students: Every piece by Bach, even or especially those without words, is still sacred music. Knowledge of the cantatas, passions, and other texted music is thus mandatory for a deep understanding and revelation of the content. You don’t have to be Lutheran, but you do have to peer deeply into the dogmas and philosophies of the early 18th century, and like any great actor, find something to identify with . . .