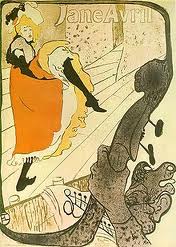 On this final post of the year, with New York awaiting a snowfall of a few inches, it’s pleasant to think of April. Jane April. “Jane Avril” that is.

You know her as the immortal can-can gal in the overexposed Toulouse Lautrec poster, even if you don’t “know” her.

She was born in 1868, to a prostitute and an absent father. Apparently, as a child she had “St Vitus Dance,” a neurological condition causing jerky movements. Its correct name is Sydenham’s Chorea. It is the by-product of rheumatic fever, usually more in girls than boys. Now you know. Anyway, she was hospitalized, and as was so often the case, treated for “female hysterics.” The “hyster” was blamed for just about everything in that sexist time.

After being released, she was taken in by the madame of a brothel (family tradition, I guess), and from there was fawned upon by a succession of more or less worldly wealthy men. She worked menial day jobs and at night danced in the clubs of Montmartre. In 1889, she was hired by the Moulin Rouge. By the way, that’s not the one tourists see today on the obligatory crawl through Pigalle.

Her jerky spasmodic movements and flame red hair made her a one of a kind sensation. She was even nicknamed “La Mélinite” after a type of explosive. People strained to get the best seats so that they might see a titillating flash of petticoat, or even “the brown eye”!

She went on to star in most of the fashionable clubs of Paris, thus attracting the attention of Mr Lautrec, whose many renditions of her created a cult around her, and a great reputation for him. Despite the “scandal” factor of her being a dancer, most people who knew her say that she was really quiet and prim. No surprise there.

She actually married (at 42) a philandering German painter, and moved to the Parisian suburbs. He left her destitute at his death. She lingered for years, dying in a senior center in 1943.