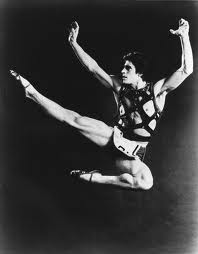 It’s the original form of George Balanchine’s name. Balanchine, born in Saint PetersburgRussia in 1904, died in New York City in 1983. In terms of longevity of his works, he may be the most influential choreographer of the twentieth century.

His father was an opera singer and composer, and his mother viewed ballet as a form of social advancement in the otherwise economically grim environment of late-Czarist Russia.

He was thoroughly schooled not only in dance, but music performance (piano), composition, and theory, a quality that enhanced his understanding of the music to which he set movement.

Married four times, he fathered no children, either in or out of those relationships.

He choreographed for the Ballets Russes (Diaghilev and post-Diaghilev), Royal Danish Ballet, music halls in London, Les Ballets 1933 (short-lived, only two months), where he was discovered by Lincoln Kirstein, the rich Harvard kid with the dream to found an American ballet company. And the rest is history.

Balanchine insisted on a school of ballet that would feed the new company with properly trained dancers, thus the School of American ballet. He was very demanding on the young Americans, coming from the rigorous Russian way of training.

I’m partial, naturally, to the Ravel Festival that he organized in 1975, the centennial of Ravel’s birth. He choreographed the following works:

None of them had ever been danced to, showing Balanchine’s sophistication in selecting works other than Ravel’s celebrated ballets “Daphnis et Chloe,” or “Bolero.”

All his works are canonical, and fortunately for them, amply documented on video, a fate which unhappily did not befall those of Martha Graham.

He used to say “I am not a man, but a cloud in trousers.” There is no more fitting metaphor for the fluidity and impermanence of dance.

I’m sure there is a Balanchine revival near you, whether you live in New York or elsewhere!