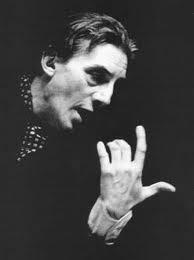 Once upon a time, there was grandeur in conducting, especially the British gentlemen: Hallé, Beecham, and Barbirolli. London-born “Sir John” was actually descended from a Venetian father and a French mother, in the great British tradition of musical geniuses from “elsewhere.” He always regarded himself as a “Cockney.” He became a freelance cellist in London during his youth. During WWI, he Anglicized his first name because the sergeant couldn’t pronounce the Italian.

He performed in the premiere of the Elgar Cello Concerto, but not as soloist, “merely” a member of the London Symphony.

Barbirolli (1899-1970) was Toscanini’s successor as conductor of the New York Philharmonic from 1936 to 1943. He treated New Yorkers to the premiere of Walton’s Façade, as well as a healthy amount of contemporary music, a lot of it British. He left during WWII because of union rules that conductors must be American citizens. He changed flights at the last minute, with actor Leslie Howard, whose plane was shot down.

Barbirolli saved the Hallé orchestra from dissolving in 1943, and remained its conductor for the rest of his life. Hallé was a wealthy industrialist who founded his own orchestra in Manchester in 1857. Can you imagine, say, Mark Zuckerberg founding an orchestra? Its survival was always precarious, despite the wealth behind it. In some seasons, only two concerts were played. Today, the organization continues, having expanded to youth orchestra, chorus, and community outreach programs.

Elgar, Delius, Vaughan Williams—you would turn to Sir John for a truly stylish “innate” interpretation. His Mahler, Sibelius, and even Schubert are still admired, via recordings. He insisted on exhaustive preparation, perhaps narrowing his total repertoire, but serving the music wonderfully. Neither did he disdain lighter repertoire, often programming Lehar and operetta excerpts.

There are over 38,000 (!) recordings/videos available, including rehearsal footage, so get thee to ThyTube!