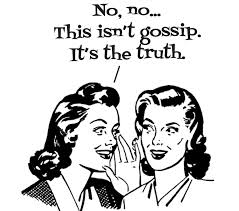 Is gossip an evil human pastime? A harmless way to share information (or misinformation)?  It isn’t going away anytime soon, especially with our technology enabling instant proliferation. At least when Hedda or Louella planned to smear someone, you had to wait for either a newspaper or a radio broadcast. Now, TMZ, the internet, and armies of creeps are waiting in the bushes. Your trash isn’t safe either.

Gossip is idle talk or rumor, especially about the private personal lives of others. We seem to have an inflated over-evaluation of “celebrity,” even involving people of no particular distinction whatsoever. But gossip applies to non-celebrities too.

I recall distinctly standing by the small flight of steps leading up to the door to the Methodist church in Perry, Ohio, when I was five years old. I heard the small-town busy bodies saying things about my French Moroccan/Jewish mother that I didn’t understand, but I felt were wrong. All the while, the sanctimonious pastor greeting his flock. With some of the wives he had, shall we say, more than a counselor role.

A lifelong dislike of hypocrisy and chatter was born in a few such instants. I thought “Peyton Place” was actually about Perry, but it’s really about “Anywhere.”

Psychologists say that gossip may even be necessary, from a societal standpoint, in that it assists communities in forming “indirect reciprocity”: I do something for you and you do something for someone else. This leads to the possibility of larger groups cooperating, hence surviving, due to trust and bond formation.

The word gossip comes from an Old English root, referring to the (once) all-female presence in the room of a childbirth, and the small talk occurring during the labor and delivery. Does this seem sexist to you? Men gossip too, though if they had to give birth, I feel there would be a lot more widely available birth control methods.

Judaism considers gossip spoken without a constructive purpose (whatever that is) as a sin. Islam equates it to “eating the flesh of one’s dead brother.” (How do they know that? Yikes!)

The master poet WH Auden said: “Whispering neighbors left and right/Pluck us from the real delight,/And the active hands must freeze/Lonely, on the separate knees.”

Think before you speak, please.