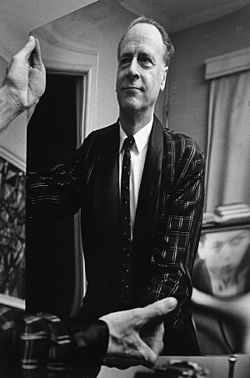 . . . into complacency, passivity, stupidity, you name it. Just don’t text while driving.

I’ve recently been delving into the works of Marshall McLuhan (1911-1980), the Canadian communications/media philosopher and guru. I wonder what he would make of all that surrounds us today. He seemed quite prophetic, even though he was only railing about the things of his lifetime: movies, radio, and television.

His most famous phrase is: “The medium is the message.” He also coined the phrase “global village” way before Tom Friedman decided the world is “flat.”

McLuhan wasn’t “anti” technology” (and neither am I), but he felt we ought to truly understand every bit of it, rather than react as victims to the profound cultural and psychological changes it wreaks.

I also wonder what he would have made of our Kindles and Nooks. In “The Gutenberg Galaxy,” he traces the arrival of movable type, the printed book, its mass dissemination, the way it changed mankind, and ultimately, the demise of the book itself. As a forthcoming author, I hope it doesn’t die before my release date. Actually he corrected interviewers who said that he said the book was “obsolete.” What he actually said was that it was in “obsolescence,” a “phase that precedes great technological developments,” which seems to be where we are going with the “e” book.

Then, as a musician, I found this marvelous quote, with which I close: “Acoustic space is spherical. It is without bounds or vanishing points. It is structured by pitch separation and kinesthesia. [Kinesthesia is the sensation of movement bodily position, etc., resulting from the stimulation of sensory nerve endings.] It is not a container. It is not hollowed out.  It is the space in which men live before the invention of writing—that translation of the acoustic into the visual. With writing men began to trust their eyes and to structure space visually. Pre-literate man does not trust his eyes very much. The magic is in sound for him, with its power to evoke the absent.”