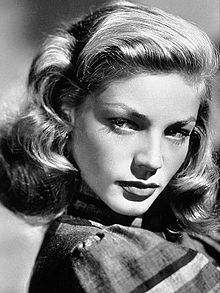 The first thing I saw was a pair of absolutely perfect female legs exiting the rear door of a black stretch limo. This was at Lincoln Center, pre-renovation, when the driveway was at plaza level. It must have been in the late 1980s, dusk, a Film Society of Lincoln Center Honors night or something.

The feet at the ends of the legs made contact with the pavement, and then a slender, silver-haired apparition in a black mink coat stood up, with her back to me. The solicitous chauffeur closed the door behind her.

She had to turn around, however, to make her way to Avery Fisher Hall, and in that instant I realized it was Lauren Bacall. What becomes a legend most? (Remember the old Blackglama mink ads?) Probably not being stared at by an introverted obscure classical pianist, for starters.

She hadn’t had to travel far, after all, her home for many years has been in the famous “Dakota” apartment building on West 72, but a legend doesn’t walk to anything, I suppose.

She exploded into the public’s collective eyes with 1944’s movie “To Have and Have Not,” with her co-star and future husband, the love of her life, Humphrey Bogart. This was followed by “The Big Sleep” (1946), “Dark Passage” (1947), and “Key Largo” (1948), always with Bogey. As recently as 1996, she was nominated for an Oscar for her performance in “The Mirror Has Two Faces.”

I went through a period of reading celebrity memoirs, mainly in my adolescence. Then it started to feel, well, adolescent, like I ought to be reading classics, music history, and “other things.”

Lately, I’ve been on a memoir binge again. I guess I now enjoy the challenge of seeing if any of the subject’s “authenticity” leaks into the finished product. Is it self-serving? Whitewashed? Coy? Frankly dishonest? Inhibited? Charming? Nowadays, everyone has a memoir, and they’re not all of equal value. For actors of a certain generation, it was perhaps even more difficult to be completely open about what happened in their carefully crafted “studio-image,” which rarely matched their true private lives.

In 1978, long before it was routine, Bacall released her memoir “By Myself,” which was updated in 2005, retitled “By Myself and Then Some.” I do think her personality comes through in these pages, at least I read them with “her” voice sounding in my head. Is that my own projection?

She tells about Bogart, his death in 1957 (He was 25 years older than her; and they had two children together.), a brief engagement to Frank Sinatra, and her second marriage, to Jason Robards (1922-2000), an acute alcoholic (They also had one child together.).

The language is as no-nonsense as I would like to believe she really “is.” Does the dream factory have me brainwashed? As LB herself said: “Here is a test to find out whether your mission in life is complete. If you’re alive, it isn’t.”