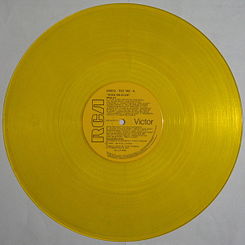 In reading Evan Eisenberg’s lucid book “The Recording Angel” I was led to think again about the idea of music as a “thing” to be possessed, repeated, and fetishized.

This problem would not exist without recording (and broadcast) technology, which has been around for more than 100 years now, and changes form but not its essential impact every few years.

Walter Benjamin thought that the “work of art” had an “aura” that would be diminished, if not outright lost, by excessive reproduction. As one of my piano teachers used to say “There’s only one Mona Lisa.” The one on the TV tray, the coffee mug, and the jigsaw puzzle isn’t the “one.”

In visual art, it’s sometimes easier to see how a poster of something can’t possibly be more than a sketchy “reminder” of the original. When you see the brushwork, the actual color, the frame, and even the museum context, you know. Even in high quality art books, color can be off, and of course texture is absent.

Then why are we, myself included, so cavalier about “sound art”? A whole industry sprang up around the idea of bringing the “immortal classics” into people’s homes via hi-fi, stereo, the LP, then the compact disc, now downloads.

Does this affect live performance? Will people still recognize the need to attend actual concerts, which are “non-reproducible” moments in time?

I wish some of you would chime in with your thoughts, because I go round and round with this in my mind. I hypocritically listen to my beloved Bach cantatas through my earbuds via the iPod Touch, completely (!) divorcing them from context, liturgical function, any sense of natural acoustic. I used them during chemotherapy, and continue to, as well as to assuage the daily chaos of New York commuting.

But I love them, have studied them deeply, and would not wish to be deprived of this convenient way of enjoying them, or “something” about them. I also attend live cantata performances whenever possible, including, recently, the John Eliot Gardiner “cantata pilgrimage” whose New York concert was in Saint Bartholomew’s.

Help, the devil’s got me!