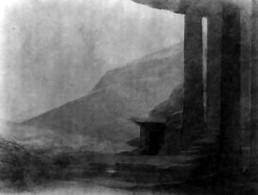 Do you ever feel like you’re just watching tiny things in a diorama when you’re at a theater or opera house? I often do. If so, Adolphe Appia (1862-1928) is our hero. Born in Geneva, in Debussy’s birth year, he outlived him by ten years. He was the son of the founder of the Red Cross.

He was a theatrical innovator, swept away by the works of Wagner, as were so many. In fact, aside from Gounod’s Faust and a slight nod to Pelléas et Mélisande, he felt that the Ring cycle, Tristan, and Parsifal were the only things worth presenting on the opera stage.

He hated the two-dimensional painted sets and backdrops that were standard at the time, insisting on three-dimensional “living” sets that the actors could move about in naturally. Light design, color, and intensity were his tools, at a time when such effects were not easy to achieve. One of his main beliefs was that the audience should feel no separation from the stage, hence no footlights, minimal proscenium, hidden orchestra.

His idolization of Wagner did not extend to the Master’s own copious stage directions, leading Cosima, the guard-dog widow, to ignore his many entreaties to give his designs a chance at Bayreuth, despite his close friendship with Aryan-loving Houston Stewart Chamberlain, who married Wagner’s daughter.

He managed to get his staging of Tristan done in Milan (1923) and the Ring in Basel (1924/25), influencing future stage directors and designers, such as Wieland Wagner, the composer’s grandson, and Jacques Copeau.

Nevertheless, he was shy and ill-suited to a “public” life of great renown, and he remains obscure even today, except to ardent theater folk.

I feel much more work needs to be done to really implement his ideals in most theaters. In recent years, I have seen a few Broadway productions (the revival of Hair, Fela!, Peter and the Starcatcher, Once) that have used either the entire theater or blurred the boundary between audience and stage, and that had excellent light design.

Classical opera fares less well. Though the Met’s “controversial” Ring of this past year did have many progressive elements., it still always feels like I’m looking at a black box with tiny figures moving around and singing (or shouting).

Light is all around us, without it there is no vision. Appreciate your light!