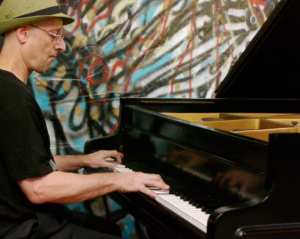 Toby Kasavan is an accomplished composer and pianist who has toured domestically and internationally. He has worked with many notable musicians including Don Covay, Bill Laswell, Willie Bobo, Bootsy Collins, the Last Poets, African Vocalist “Mangala”, and was co-curator/performer/composer of the Whitney Museum’s “80 Fingers” duo piano festival. Mr. Kasavan is the founder of the Fingers DelRay Bandi performing original and standard blues and related material Toby has also worked as a pianist for some of the most prominent modern dance companies in New York City including Martha Graham, Ballet Hispanico, Alvin Ailey and Paul Taylor.

Toby is the founder of Neighborhood Music and Arts, which he started in 2006, having observed a keen need for young people to express themselves through performance as a release of emotion. Mr. Kasavan’s program has become a positive tool to channel energy and to help schools and students reach their full potential through the arts. Mr. Kasavan holds a BFA in music composition/Ethnomusicology from California Institute of of the Arts, certifications for teaching Tai Chi Chuan, and a 5th degree black belt in Aikido.