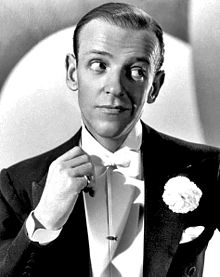 It seems impossibly elegant. The formally dressed couple twirls in the hotel room or ballroom, in white tie and tails, evening gown. Hollywood’s finest fantasy fabrication. “At the risk of disillusionment, I must say that I don’t like top hats, white ties, and tails.”

Nebraska native Fred Astaire (1899-1987, born Frederick Austerlitz) got his start in vaudeville, with his sister Adele. When she retired, the hunt was on for someone equally iconic to partner with him. Enter Ginger Rogers. He made 31 musical films, over a 76 year long career (!), ten of them with Rogers, who presented him with his Honorary Oscar in 1950.

Was Astaire a “nice” man? We may never know. He writes in blunt terms in his memoir “Steps in Time” about the long days and nights, the grind of traveling, the relentless perfectionism. He was a quiet arch-conservative Republican. He never permitted a movie to be made about his life because he didn’t want it to be “misrepresented” (his word), as he was sure it would be.

Does it all seem old-fashioned, unwatchable? I think the success of “Dancing with the Stars” shows that there is still a sizeable audience for people to watch other people cope with, and triumph over, the task of moving gracefully through space.

Yes, we no longer believe in white tie and tails and endless cocktail parties filled with “swells,” but we need a dose of dream, for sure.