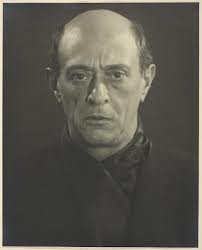 Arnold Schoenberg was but one of the many classical composers brought to Hollywood to gussy up the movies with their music. Some were successful, witness Korngold, the child prodigy whose music always sounded like “movie” music anyway, and Copland, whose music to The Heiress is classic.

However, when one hears the name Schoenberg, one usually doesn’t think of soundtracks, even though in the scores of Bernard Hermann for instance (think Psycho), you encounter a great deal of dissonance that doesn’t seem to bother anyone today.

At any rate, when Irving Thalberg, head producer at MGM, was casting about for a score for Romeo and Juliet, he asked Arnold to write something “lovelier” for his 1936 movie, Schoenberg calmly replied: “Mr. Thalberg, I don’t write lovely music.” The score wound up being by one Herbert Stothart.

Thalberg died that year, at age 37, presumably not as a result of the interchange with Schoenberg.