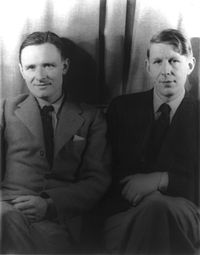 From 1928 to 1933, two gay Englishmen went to the legendary playground ofBerlinto enjoy certain freedoms they were not permitted at home. Those two men were W.H. Auden (1907-1973), one of the great poets of the twentieth century, and his sometime playmate Christopher Isherwood (1904-1986), a short story writer and novelist.

Isherwood’s “Berlin Stories” would form the raw material for the musical “Cabaret.” Auden made less overt use of the locations—seedy bars and rent boys—but sublimated a lot of the sexual/romantic desire into his poetry.

Germany in theWeimar Republic period has often been written about—the hyper-inflation, the arts scene, the hedonism. Alas, hindsight seems to tell us that it was all a prelude to the rise of Hitler, and all that followed.

Of course, had either of the two men actually had to work for a living, they might have remained content to subvert Britain from within so to speak. Only those with some kind of independent income could afford to cross the Channel and savor the forbidden pleasures of the Continent.

Nevertheless, we must be content with the literary transformations that this interlude offered the two men. I have always wondered how they got anything done, with the prodigious amounts of alcohol consumed—at any time of day or night—and the frequent liaisons with opportunistic “super-Aryan” hustlers. Ah, to be in one’s early twenties again. Auden and Isherwood often took their current assignations on trips to resorts in Switzerland or elsewhere.

An example of Auden’s forthright romanticism can be seen in the following poem, which was also set to music by Benjamin Britten in his “4 Cabaret Songs”:

Stop all the clocks, cut off the telephone,
Prevent the dog from barking with a juicy bone,
Silence the pianos and with muffled drum
Bring out the coffin, let the mourners come.

Let aeroplanes circle moaning overhead
Scribbling on the sky the message He Is Dead,
Put crêpe bows round the white necks of the public doves,
Let the traffic policemen wear black cotton gloves.

He was my North, my South, my East and West,
My working week and my Sunday rest,
My noon, my midnight, my talk, my song;
I thought that love would last for ever: I was wrong.

The stars are not wanted now: put out every one;
Pack up the moon and dismantle the sun;
Pour away the ocean and sweep up the wood.
For nothing now can ever come to any good.