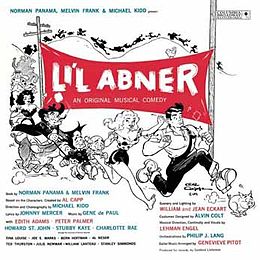 The first high school musical I was in was “L’il Abner.” I was Evil-Eye Fleagle, henchman for General Bullmoose. Fleagle wore a 1920s oversized zoot suit (made by my stepmother) and had his signature “terrifyin’ paralyzin’ truth whammy” he could apply to anyone.

“Three rousing rahs, a few huzzahs, and a hip hip hip hooray! What’s good for General Bullmoose is good for the USA!”

Bullmoose’s secretary was the busty Appassionata von Climax, something that may or may not have gone unnoticed by the farm folk of Perry, Ohio in 1974. Perry was a lot like Dogpatch, at least to me.

“It’s a typical day in Dogpatch USA, where typical folk do things in a typical way. First we rubs the sleep from our eyes, git our grub and shoo ‘way the flies. We spend what’s negotiable, then we gets sociable, sittin’ around swappin’ lies. And then we drops by to collect unemployment pay . . .”

The residents of Dogpatch are fighting to keep their town from destruction in a nuclear test. The US government decided to find the “most unnecessary” town and blow it up. Mammy’s Yokumberry tonic is produced as evidence of the town’s “necessity,” and an assortment of scrawny hillbilly men are carted off to Washington to test the tonic’s effects on their muscles. (Lance Armstrong, it was already fodder for musical comedy in the 1950s.)

When their wives go to Washington, all their spouses can do is preen, flex and look at their bulging muscles in the mirror, which causes the women to sing “Put ‘em back the way they WUZ! They wuz not known for beauty, but they sho done their duty, and they made the boudoir buzz . . .”

And of course, there’s the love story between Daisy Mae and the clueless but sincere mattress-tester L’il Abner. The Sadie Hawkins Day parade and race is the only day on which the women can capture the men they want and make them marry, ideal for Daisy, since Abner is supremely uninterested in her or anything but loafing.

I was never the romantic lead. I had too much weird self-awareness and an arch sense of humor. And those geeky glasses.

The musical is probably dated, maybe it was already dated in 1974. With its cold war era paranoia, scientific genetic engineering, government incompetence, I think it remains relevant. All this sprang, like a hillbilly version of Proust’s madeleine, when I recently read Edie Adams memoir “That’s All.”

Adams (1927-2008) won the Tony in 1957 for her Daisy Mae. She was a classically trained (Juilliard) soprano, married to zany comedian Ernie Kovacs. Adams was in “Wonderful Town” with Rosalind Russell in 1953. Today Kovacs is largely forgotten, but the two of them were pioneers in the very first days of television, when “anything went.”

Edie did many cigar commercials, back in the “bad old” days when such advertising was rampant. Kovacs was a big cigar smoker, but tobacco didn’t kill him, a car crash did, in 1962. Today, he is remembered more for his tax troubles than his innovative comedy. The couple made a record together, with the title “Music to Listen to Records By” (subtitle: Edie Adams Sings?)