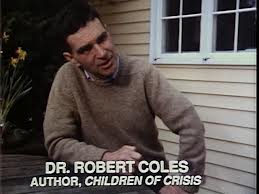 Do you know the work of Robert Coles (b. 1929), eminent child psychologist and professor at Harvard? I came to it obliquely, while searching for some James Agee related something or other. He is the “James Agee Professor of Social Ethics” at Harvard. Who knew there was such a position? Fitting, for the author of “Let Us Now Praise Famous Men,” though hard-drinking and tormented, had a great sense of social injustice, despite his “white-glove” prep school upbringing.

Anyway, Coles has authored more than eighty books and 1300 articles, nearly all of them concerned with human moral, spiritual, and social sensibility and reasoning, mainly in children but also in adults, especially writers. There’s the Agee connection again.

Coles discovered that the many children and adults in the midst of crisis whom he interviewed over the years seemed, in most cases, quite normal psychologically. In many instances, the more strenuous the challenge, the greater depth of character the subject demonstrated. Speaking of his early work among children in desegregating New Orleans schools in the early 1960s, he recalls: “I was looking for ‘psychopathology’ in those early years of my residence in the South.” What he found instead was “remarkably little psychiatric illness … despite their trials.”

In 1961, he attracted considerable attention with an article he wrote in The Atlantic Monthly challenging traditional psychiatry. “When the heart dies,” he reflected, “we [psychiatrists] slip into wordy and doctrinaire caricatures of life. Our journals, our habits of talk become cluttered with jargon… We embrace icy reasoning.”

As Coles listens to people talk about their lives, he has been impressed and moved by their moral sensitivity by the ways in which people reflect on their lives in moral terms. He has been astonished by the moments of sudden insight that quite “ordinary” people experience. In The Moral Life of Children, for instance, he reflects on the life of Ruby Bridges, the six-year-old girl who figured prominently in the first volume of Children of Crisis, with whose study Coles began nearly thirty years of work. Ruby was one of the black children who, in the face of abusive, even violent, resistance, initiated school desegregation in New Orleans. Her mother told Coles that every night Ruby prayed for those in the mob who threatened and harassed her. “I think of the many black children my wife and I came to know, in Arkansas and Louisiana and Georgia and Alabama and Mississippi — and of the white children too, who braved awful criticism to befriend them…. Whence that moral capacity, that moral spirit, that moral leadership? How are we to make sense of such moral behavior in psychodynamic terms?”

He was one of the first to recognize that even small children have highly developed moral systems that deserve full consideration. Yet, they’re not “little adults.”

Coles found that children decide what is right and wrong largely by listening to one another and watching was goes on around them. When asked about lying, stealing, using drugs, abortion, or their reasons for choosing a job, they expressed rudimentary ethical systems or “moral compasses,” as Coles called them. These turned out to be more important than traditional background factors such as economic status, sex, race and even religious practice. Yet he found that these moral standards are increasingly set aside as children begin to reflect the values of society. The pressure to succeed and the mindset that “what works is what works for me” begins to supplant that inner voice. “Sadly,” Coles said, “as so-called cultural literacy grows, what could be called moral literacy declines.”

_Sondheim, from Into the Woods