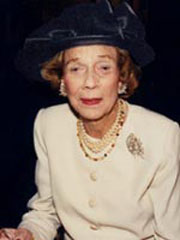 She may not have started with much, but she sure married it. To her credit, Brooke Astor’s philanthropy was generous and legendary. But all that money couldn’t shield her from a greedy son and his wife.

Born Roberta Brooke Russell in 1902 to a distinguished military family in New Hampshire, she grew up all over the world, including China, Dominican Republic, and Haiti. Her first marriage, at 17, was to a playboy (J Dryden Kuser), who lived off his family’s income, indulging in abuse, alcoholism, and adultery. Their child, Anthony (b. 1924), will be mentioned later.

Her second marriage (“a love match”) was to another wealthy, connected man, Charles Marshall. Although Charles never formally adopted her son, Anthony Kuser was so fond of Marshall that he changed his last name. Marshall died in 1952, freeing her for her final, triumphant last rung on the financial-social ladder, her marriage to Vincent Astor.

Married in 1953, this third husband lived only another six years. He left her in charge of the formidable Astor Foundation, from which many philanthropic bequests originated, most notably to the Metropolitan Museum of Art, the New York Public Library, the Animal Medical Center, the Lighthouse for the Blind, and the Juilliard School, to name but a few. She liquidated the foundation in 1997, as required by not-for-profit law, but remained an active presence in upper-crust New York circles.

Starting in 2006, her grandson, (Anthony Marshall’s son) sued to have his father removed as guardian of Mrs. Astor’s financial estate. She was 104 at the time, and died the following year at 105 (!). There were allegations of elder abuse, etc. Anthony Marshall was finally convicted of grand larceny in 2009.

Brooke’s epitaph in Briarcliff Manor, where her last mansion was, (she is buried in Sleepy Hollow) is a simple: “I had a wonderful life.”