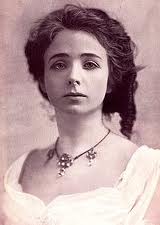 It’s always wonderful to find people of the remote past saying things that are still pertinent today.

Maude Adams (1872-1953) was a turn-of-the-century (19th into 20th) stage actress. She played not only on Broadway, but on grueling tours throughout theUS, often via stagecoach. Her signature role was 1905’s “Peter Pan.” Apparently her gifts were modest but of infinite charm and lightness. She inspired devotion in her many fans. Prior to “Peter,” she made her fame in a Victorian property called “The Little Minister.”

In reading a memoir about her, I ran across the following inspiring words.

“Changes of taste and temper come rather quickly in the theater. When I was a young girl they used to say to the leading lady at rehearsal: ‘Don’t think—feel!’ Then the poor soul would have a fit of hysteria, and that was acting. Now those fits are called brainstorms and have no standing whatsoever. I wonder, as we grow farther away from our primitive selves, if the time will come when psychologists will dig out lost emotions and reconstruct human passions as scientists today reconstruct pterodactyls?”

“Don’t let anyone persuade you that anything we do in life less than our best, is a worthy thing. You most never compromise with your life. We know when we are doing first-rate things. When we satisfy ourselves with second-rate things it is the beginning of a long, long death. We die from that minute.”

She also appeared in an English language version of Edmond Rostand’s “Chantecler,” a play whose message is that no matter what your occupation, if you do it with full commitment, it is valuable.

“We must sing the song we know

Must sing the song God gave us. Sing though we know

That other songs are more beloved than ours,