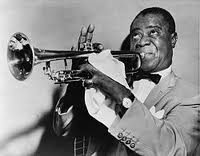 Dear readers, 2012 marks the 100th anniversary of the first appearance of the word “jass” in print, in a newspaper. It took a few years for the spelling to standardize to what we call “jazz.”

I’ve been listening to a lot of trumpeter Louis Armstrong lately. His home for many years is only a couple of miles from mine (now a museum). His fourth wife, Lucille, picked it out, in Corona, Queens. In the late 1940s, blacks were not welcome in every neighborhood, but Corona was one of the “okay” ones. There’s a garden party there today and tomorrow, if you’re in New York.

What do we mean when we say “jazz”? It evolved from many streams of American black (and non-black) life and culture: work song, hymns, spirituals, blues, “Dixieland” (New Orleans), syncopated music often lumped together as “ragtime,” popular song, and dance.

It is NOT “random improvisation,” although in the 1950s a “strain” of that more abstract music making crept into jazz, rendering people rather judgmental about the old-fashioned approach of an Armstrong or a Jelly-Roll Morton, who claimed to have invented jazz!

I prefer to call it “variation” over a known tune. That’s where the element of disciplined freedom comes in. The musicians know the structure, chords, and key areas ahead of time, but can then embroider around and over it, as far as their virtuosity or desire permits.

We need to remember how hard life on the road was for the earliest players. The US was far from desegregated, and black musicians were not allowed to stay in most hotels or eat in most restaurants. A (white) manager would have to run in and bring food back to the bus. Some places would not even allow the band itself to be mixed-race.

Armstrong, at one point the second most popular entertainer in America after Bing Crosby, got into hot water be calling Eisenhower an “asshole” for his poor response to school desegregation in Arkansas (sending in federal troops to “preserve law and order.” America really needs more than two eyes, we have so many black eyes when it comes to race.

A lot of jazz critics more knowledgeable than I am consider Armstrong’s heyday to have been his early recordings from the 20s. They seem to be uncomfortable with his evolution into a more general entertainer, including singing and acting. “Hello, Dolly” paid all his bills for many years. And who can forget “Wonderful World”?

I apologize for my wandering tone today, illness being what it is, but please investigate “Pops” Armstrong, or Earl “Fatha” Hines, or any jass musician of your choice!