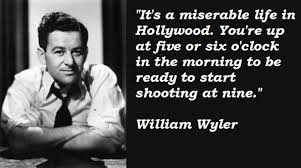 The legacy of director William Wyler (1902-1981), the “bona fide perfectionist.” Born in France to Alsatian Jews. Worked for a while as a shirt seller in Paris. Related to Universal’s Carl Laemmle through his mother’s family. Emigrated to Hollywood. Both his wives were named Margaret. Convenient for when you’re calling that name out in the throes of passion.

According to anecdote, noted violinist Toscha Seidel (famed for his lush tone, and who made his career in the studios of Hollywood movies) told Wyler: “Mr Wyler, you do not vibrato by shaking your leg.” The director wanted a more visually demonstrative expression of the player’s emotion.

Wyler himself was quite pithy: “I made over forty Westerns. I used to lie awake nights trying to think up new ways of getting on and off a horse.” “It’s eighty percent script and twenty percent you get great actors. There’s nothing else to it.” And “Stills belong in the lobby, not on the screen.”

So, dust off your Netflix subscription, stop binge watching House of Cards, and spend some time with a legend or two.